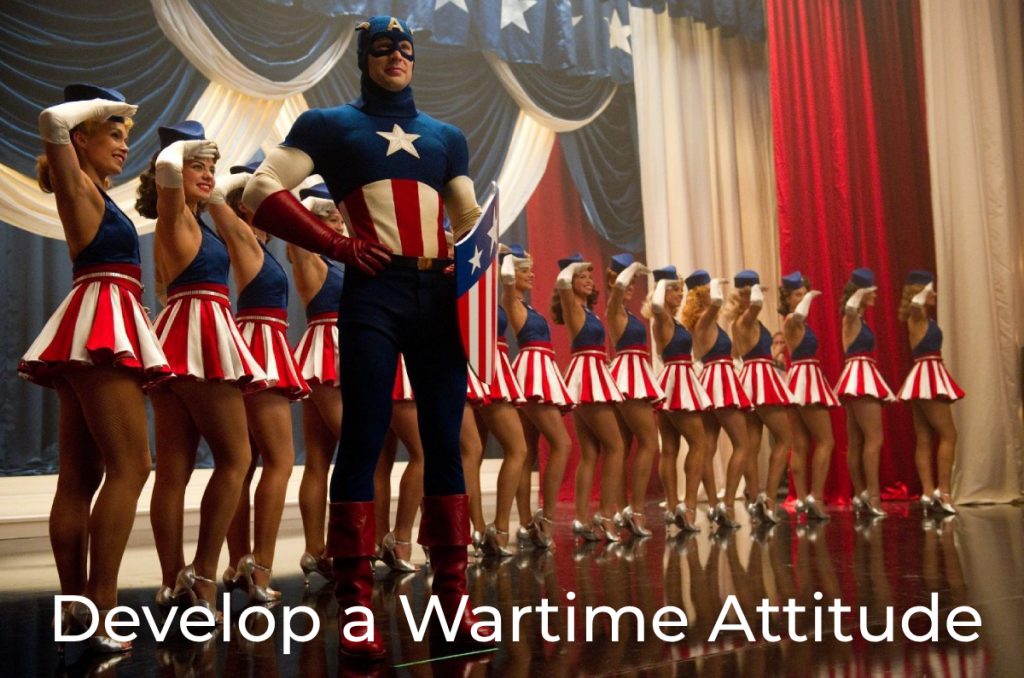 Folks, do you have a wartime attitude or a peacetime mentality in your everyday lives?

The last time we had nationwide wartime mindsets here in America and the UK was nearly 80 years ago during World War 2. If you’re not familiar with it, the “war effort” here at home was a spirit of cooperation whereby the general civilian populace joined together with our military and industry by doing things like rationing and by collecting and recycling materials such as rubber, steel, and aluminum for instruments of war. Millions of housewives, who had previously never entered the workforce, were now employed in factories building tanks, vehicles, planes, and bombs. Yes, in certain ways life went along as “business as usual,” but at the same time we all knew of the reality of the war in the Pacific and in Europe, and we as a society joined together to fight it together, doing whatever we could. We as a country really banded together in unity both in effort and in attitude.

One of the devil’s biggest lies is that we as Christians are not at war today. But in fact, we are very much engaged in daily combat, and its theater of operations is actually much more immense than the physical battlefields that our country’s military would fight on. According to Ephesians 6:12, “..our struggle is not against flesh and blood, but against the rulers, against the authorities, against the powers of this dark world and against the spiritual forces of evil in the heavenly realms.”

It’s in the spiritual domain that the forces we cannot see with our fleshly eyes are raging assaults around us to try to win our hearts and minds. We have an enemy who sometimes sneaks and at other times openly struts around and is absolutely relentless by placing well-coordinated, multi-tiered attacks to keep us distracted, to keep us lukewarm, and to keep us too satiated by the pleasures and lusts of today’s world. Satan and his forces prowl around like a roaring lion, seeking someone to devour.

What happens in the spiritual will spill over into the physical. So that means that we can see and smell and sense the figurative bombed-out craters, the bullet-riddled buildings, and the clouds of “Agent Orange” choking and killing civilization; the fallout…the victims…and the dark effects of this war are apparent every day. Divorce is rampant in families. Many fathers aren’t there in their kids’ lives. The moral fabric of society is being shredded to ribbons like Wolverine’s claws to rice paper. Massive throngs of people are addicted to pornography, alcohol, or drugs. Hundreds of millions are starving and thirsty around the world. Billions of people will die and perish an eternity in Hell without Jesus.

Meanwhile, our local bodies of worship organize softball teams or offer showings of Pixar movies in our air-conditioned church buildings, all with barely a mention of the name of Jesus. People are bragging about their new luxury SUVs and their vacation homes. Folks admit their boredom on social media to crowdsource ideas for new television series to binge on for huge blocks of hours at a time.

Now I’m not saying it’s evil to play a sports game or to watch a CGI squirrel or take in a TV show every now and then. But guys, we need to start weeping for the lost. We need to stop living as if there’s not a care in the world. We are at war!!! We need to repent of our laziness and start digging in deep with our time, our hearts, our money, and our resources. 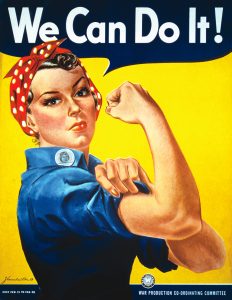 So take a cue from the “Greatest Generation” of the 1940s, from our boys fighting overseas to the “Rosie the Riveters” pitching in and helping where they hadn’t before. Change your mindset! Step up and volunteer and don’t be afraid to get your hands dirty and bruised up. Pray and cry for the souls of those who are perishing. Run to the “front lines” by getting out there and spreading the Gospel and feeding the poor. Radically sacrifice at home and do what needs to be done for the Kingdom of God.

If we, as John Piper once said, have a “Spartan readiness to go anywhere and do anything at any pain for the King,” we will begin to see a move of God previously unseen.