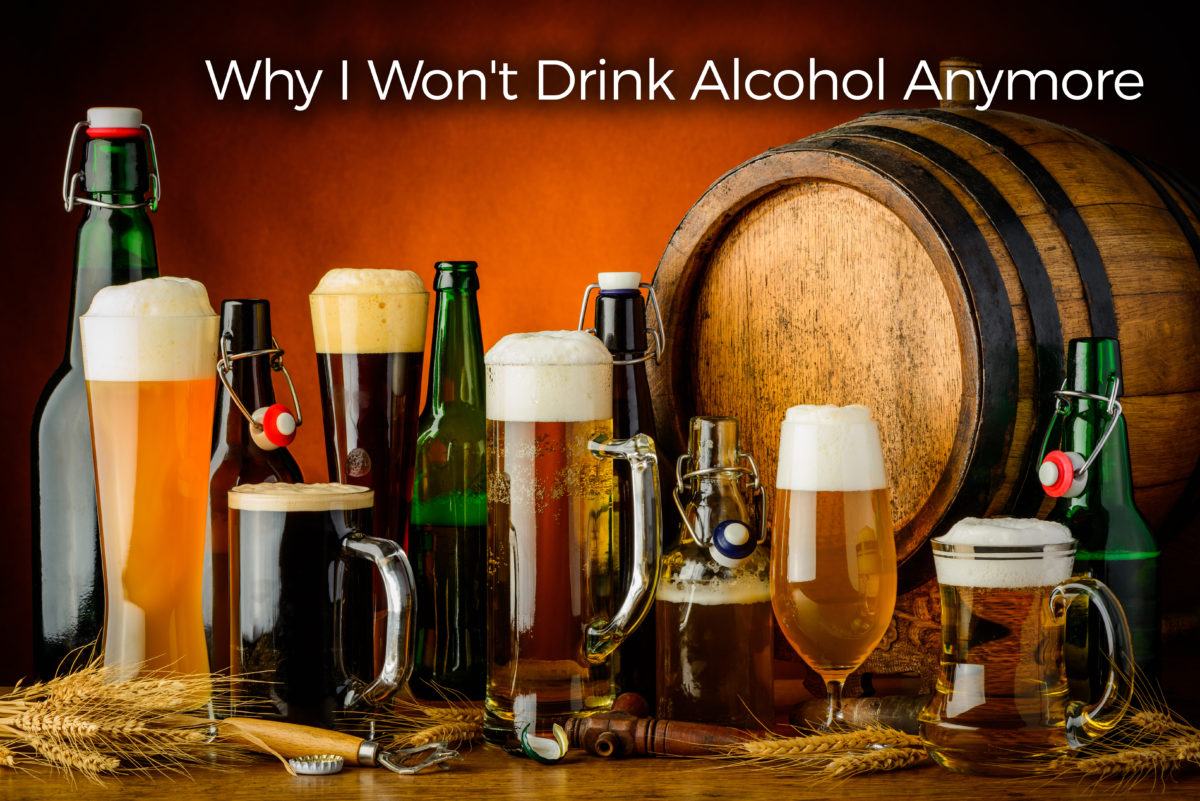 What I’m about to say is full of my own opinions, along with my attempt at well-thought-out reasons why I do not drink alcoholic beverages. Except for point #6, these points are not presented or implied that they are Christian doctrine or theology. Instead, they’re mainly personal arguments about why I have no desire to touch the stuff.

I wish to make a few important disclaimers before I start things off:

A. Some people have natural inclinations towards becoming addicted to varying things (either through hereditary or learned, behavioral means), while others don’t. For example, some individuals can drink liquor frequently and never have it turn into a problem, while for others even one glass of wine or bottle of beer is enough to send them back in a downward, life-swallowing spiral of ownership over them.

I thankfully have no addictive tendencies towards alcohol, and I firmly believe that logically, morally, and biblically, it’s okay for people to imbibe sometimes, just as long as it doesn’t lead to either a dependence on booze or lead to frequent drunkenness (more on that later). I just choose not to drink.

B. Saying I never will take a sip of alcohol ever again is a bit of an overstatement. I can say with assuredness that I will at some point in the future sample a few beers or a few wines. Being a foodie and a curious taste tester, I will probably want to try out something, possibly in a winery setting. So, there will be no hypocritical backpedaling from me if you see me take a drink of something a year or two from now. I just have minimal interest in doing so. If I’m not able to sit back and crack open a few brewskies for the rest of this year, it won’t bother me in the slightest.

That having been said, here are several reasons why I do not want to drink alcohol:

One of the Roberts Family curses is severe acid reflux, in particular on my dad’s side of the clan. I mean, without taking daily acid reflux medicine and popping the occasional antacid, we Roberts kids would be in some serious, agonizing pain!

Even with the aforementioned medication, I still have to be careful about what I consume because other things can still trigger discomfort and burn. Fried foods, carb-heavy foods (bread, muffins, and pasta, to name a few) foods that are high in acidic components like tomato sauce and orange juice, pizza, and even coffee to a lesser extent, will tear me up inside if I’m not careful.

The same goes for beer and wine, perhaps even more than any other food or drink. In the past, if I’d known that I was going to partake in the drinking of liquor several hours beforehand, I would down another Prilosec pill and have an extra supply of Tums on standby, and still will probably get excruciating heartburn.

So, why put myself through the pain?

I’ve Had a Couple of Significant Others Who Were Alcoholics

Because of the slim chance that these ex-girlfriends happen to be reading this, plus out of respect of keeping their personal business personal, I will not divulge the identity of these women.

I can tell you that their alcoholism affected them in their everyday lives in different ways.

One woman (at a time when I still engaged in premarital sex) was completely unable to be affectionate or intimate without first being blitzed out of her gourd. She would have to almost always have a glass of wine attached to her hand, as well as purchase both flutes and bottles of wine when we dined at restaurants morning, noon and night. Any time when she had to refrain from alcohol for an extended amount of time (such as driving on a long road trip), she would become a frazzled mess and would quickly need to “refill” when we got to our destination.

With the other lady, alcohol was integrated into her life in a more “under the radar” way, but it still was not any less damaging to her and the ones around her. With the surplus of severe psychological issues plaguing her life, alcoholism only accentuated those problems.

With both women, the end result was the same. 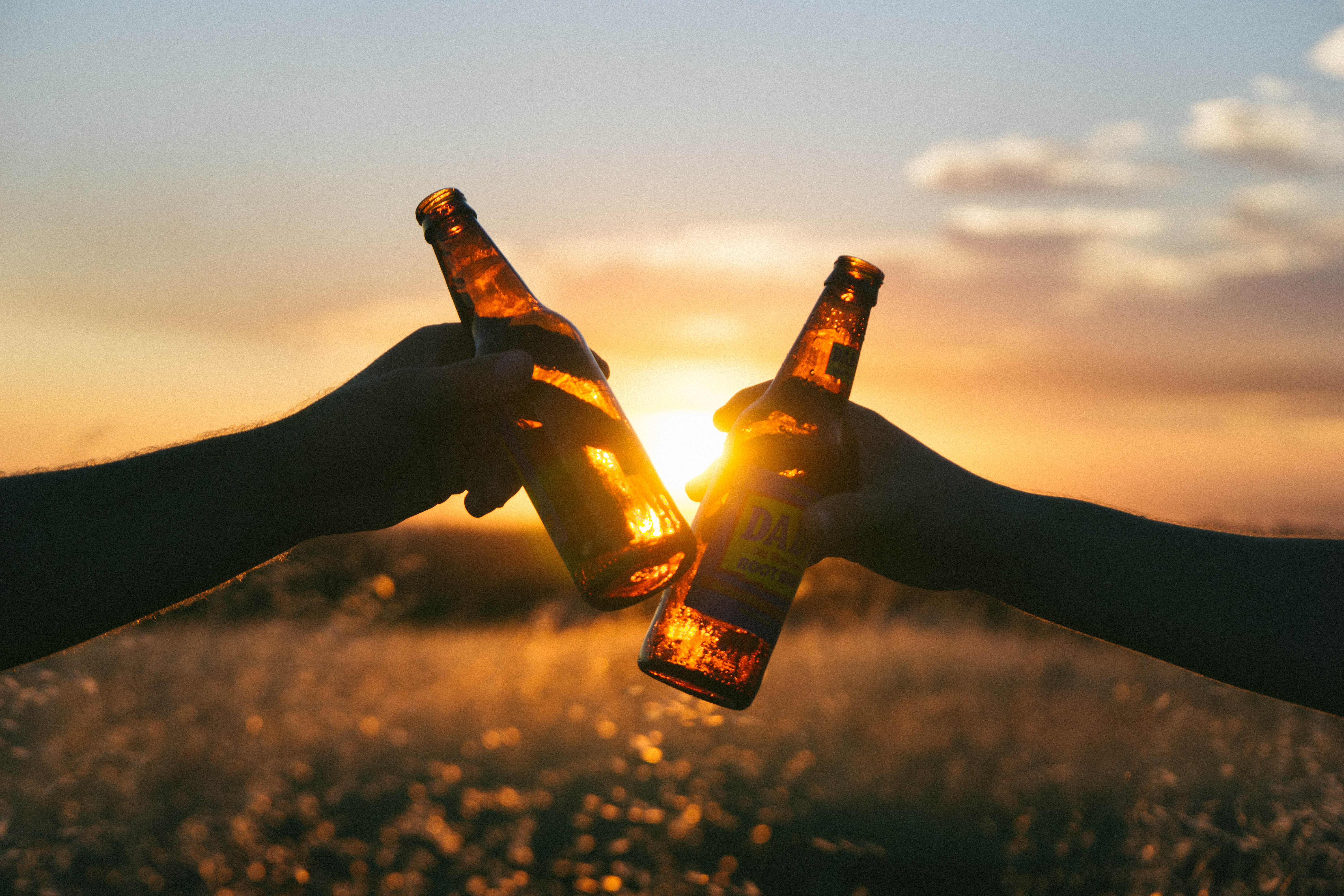 It was sad to see them in the jail cell of addiction. If you’ve ever lived with an alcoholic you know the myriad of ways that it can afflict both the drinker and those around him or her. It’s an enormous burden to bear. If you are a spouse or family member of an alcoholic, you know that in order to successfully make it, you yourself have to be an exceptionally strong person with an exceptional faith in God, plus the alcoholic in question needs to want to come to grips with their problem and be willing to tackle it. I applaud you for your courage and fortitude in sticking with them.

Since neither girlfriend was exactly willing to face their addictions head-on, it would have been nothing but an uphill battle and an endless source of drama and agony for my teenage boys and me.

Therefore, alcohol’s luster has become tarnished even more in my eyes. I want to have little or nothing to do with it after being around these women. Drinking, in general, turns me off big time.

Alcoholic Beverages Really Don’t Do Anything For Me

Booze will affect people in different ways, but I can pretty accurately state that after a night of heavy drinking, a vast majority of folks will feel freer and more confident like they’re ten-foot-tall and bulletproof, and will chug away their stresses and anxieties until they feel loopy and fun.

With me, I’m already confident and bold enough when I’m sober. Getting a buzz will do nothing additionally positive for me. Sure, I mellow out after a few drinks. But I, like virtually everyone else (except for maybe Dr. Johnny Fever on WKRP), steadily lose control of motor functions and lengthen reaction times. Plus, alcohol has another negative effect on me in this next point…

Yes, drinking makes me incredibly sleepy. Since I’m already tired enough as it is, why would I want something that would make me feel even more zonked out and have a first-class ticket on a bullet train to dreamland? By late afternoon on any given weekday, I’m usually dragging and craving a good nap. Drinking alcohol at dinnertime is only going to make things worse for me. I’d rather stay up a few additional hours than want to go to bed at 8:00 pm.

Many of us had our very first taste of beer as an older kid or as an adolescent when perhaps our father or an uncle let us try a sip from their can or bottle. I bet you remember the thoughts going through your head after your initial beer tasting, and most likely it wasn’t a pretty one. If you’re like me, you probably thought it tasted bitter at best. It wasn’t until either 1) the enticement of getting drunk in your late teens, or 2) when you finally developed a taste for beer that you started to actually crave it.

Me, I’ve never developed a taste for it. Throughout my life, I’ve drunk lagers, pilsners, pale ales, IPAs, porters, and stouts. I’ve sampled everything from big, American suds to microbrewed brands to garage-made craft beers. I’ve been intrigued by flavored beers, yet they do little to improve my overall experience. Yes, even as a chilehead, I’ve drunk various chile pepper beers! In all honesty, nothing has thrilled me.

You may be saying, “Okay Scott, what about other alcoholic beverages? Wine? Whiskey? Rum? Bourbon?”

Well, wine charts a little higher up the likability yardstick for me, but only when it’s a sweeter, fruitier variety, and not a nauseatingly bitter, dry red wine. I’ve been a past webmaster for vino.com (which used to be a thriving wine site that hosted an early wine podcast hosted by Spencer Christian of Good Morning America), and I’ve visited plenty of beautiful Missouri wineries, so I’ve gotten to know my way around a cork and bottle. In the context of a wonderful, multi-course dinner prepared by a winery chef, sure…I’ll go ahead and sample what the sommelier recommends. Yet even the most pleasing, full-bodied, sweet wine doesn’t do a whole lot for me.

Hard alcohol has the flavor of gasoline to me. I really don’t care if you think I should turn in my “man card” for bashing Jack Daniel’s or Wild Turkey. I just would rather not guzzle down something that tastes like you can remove paint with it.

A Biblical View of Drinking

Lastly, I’ll bring up what the Bible says about alcohol. This section is not going to be an exhaustive dissertation on the topic by any means; it will, in fact, be a swift overview.

No matter what I feel above about this (or any other) subject, ultimately God’s Word must dictate my thoughts and my actions on it.

The Bible mentions wine quite a bit in both the Old and New Testaments, and to a lesser extent, beer. Alcoholic beverages were a big part of middle eastern culture, and have been for thousands of years. God has never forbidden His followers to abstain from alcohol completely. At times throughout Scripture, it’s even painted in a positive light:

“Go, eat your food with gladness, and drink your wine with a joyful heart, for God has already approved what you do.” – Ecclesiastes 9:7

“He makes grass grow for the cattle, and plants for people to cultivate – bringing forth food from the earth: wine that gladdens human hearts, oil to make their faces shine, and bread that sustains their hearts.” – Psalm 104:14-15

“Stop drinking only water, and use a little wine because of your stomach and your frequent illnesses.” – 1 Timothy 5:23

Let’s not forget the famous story of Jesus turning water into wine at a wedding reception (see John 2:1-10) after they had run out of their supply. Not only did our Lord produce an alcoholic drink for the attendees, but created a wine of the highest caliber, as the bridegroom exclaimed, “Everyone brings out the choice wine first and then the cheaper wine after the guests have had too much to drink; but You have saved the best till now” (verse 10).

There’s also a darker side of drinking alcohol, as when a line is clearly crossed into drunkenness it becomes a sin: “Do not get drunk on wine, which leads to debauchery. Instead, be filled with the Spirit…” (Ephesians 5:18) and “Let us behave decently, as in the daytime, not in carousing and drunkenness, not in sexual immorality and debauchery, not in dissension and jealousy.” (Romans 13:13). Other similar instructions appear in Proverbs 20:1, Galatians 5:19-21, and 1 Peter 4:3.

So the Bible, while permitting the drinking of beverages like wine, clearly takes a stance that drunkenness is definitely something from which to stay away.

I’m not about to throw a hissy-fit if I see a devout Christian enjoy a beer or appreciate a glass of wine every now and then. I would just like to gently instruct them to be careful in the amount they drink and warn them about any possible glorification of getting plastered.

Previous
How to Argue Your Faith Online, Part Two
Next
Book Review - Driven By Eternity by John Bevere