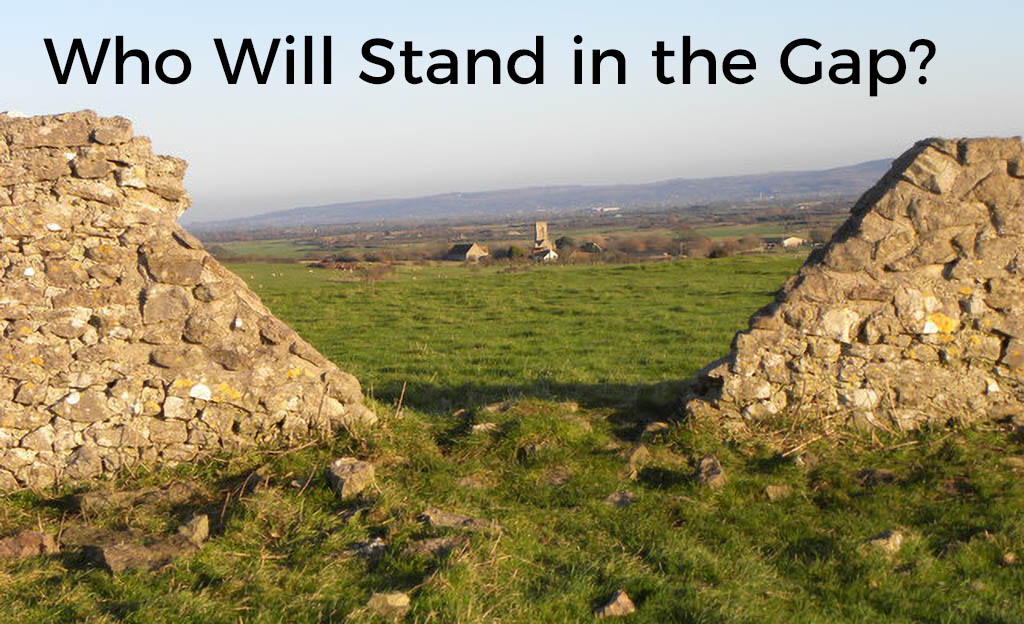 I looked for someone among them who would build up the wall and stand before me in the gap on behalf of the land so I would not have to destroy it, but I found no one.”
– Ezekiel 22:30 [NIV]

This verse is a scathing indictment of God’s people in a troubled time. For those who don’t know the context of Ezekiel Chapter 22, it is this: shortly before the siege of Jerusalem and the takeover by the Babylonian Empire, the LORD gave the prophet Ezekiel powerful visions and judgments against both the southern kingdom of Judah and against the city of Jerusalem itself.

Chapter 22 shows God’s charge against Jerusalem in how His people have fallen so far from Him. I encourage you to read it; it’s a sobering and humbling passage.

Towards the latter part of the chapter, several groups of people are called out.

First, the princes. They conspire together to “devour people, take treasures and precious things and make many widows within her”
– Ezekiel 22:25 [NIV]

The priests “do violence to my law and profane my holy things”
– Ezekiel 22:26 [NIV]

The officials “are like wolves tearing their prey; they shed blood and kill people to make unjust gain”
– Ezekiel 22:27 [NIV]

The prophets “whitewash these deeds for them by false visions and lying divinations. They say, ‘This is what the Sovereign Lord says’ — when the Lord has not spoken”
– Ezekiel 22:28 [NIV]

And, it’s not just those with a special high office, but everyone is next on the list…and the people “practice extortion and commit robbery; they oppress the poor and needy and mistreat the foreigner, denying them justice”
– Ezekiel 22:29 [NIV]

“I looked for someone among them who would build up the wall and stand before me in the gap on behalf of the land so I would not have to destroy it, but I found no one.”
– Ezekiel 22:30 [NIV]

God had looked for someone…ANYONE…who was willing to build up a figurative wall against sin, rebelliousness, and complacency. Some faithful and brave individual who is willing to fill in this huge hole in the wall and be not afraid to do His work.

The need to stand in the gap before God is as urgent now as it was nearly six hundred years before Christ.

God seeks someone to intercede with him on behalf of his sinful people today. He is looking for bold men and women of prayer who will not let the cushy and comfortable trappings of today’s society choke out all activity with God out of them.

The Christian life is not a cruise ship where you get to kick back with a mai tai and enjoy the good life. No, it is a battleship. It is a daily struggle against Satan and the spiritual forces of darkness. It is a battle against the rebellious teachings and ways of this world. It is an all-out war against sin and the flesh.

We need men who are courageous and bold, and who are not afraid to step forward and stand in this gap. These men need to lead their wives and their children and show them what a godly household looks like when it is under the Lordship of Jesus Christ. We need people who aren’t afraid to say that it’s wrong to binge-watch a streaming show for 12 hours but haven’t opened a Bible in 5 or 6 days. We need people who fear God and are fearless of this world. We need individuals who will stand up and draw a hard line in the sand against evil and sin. We need people of God setting the standard for radical love and devotion to each other.

Previous
Faithful In The Small Gigs
Next
The Poor Are Hated