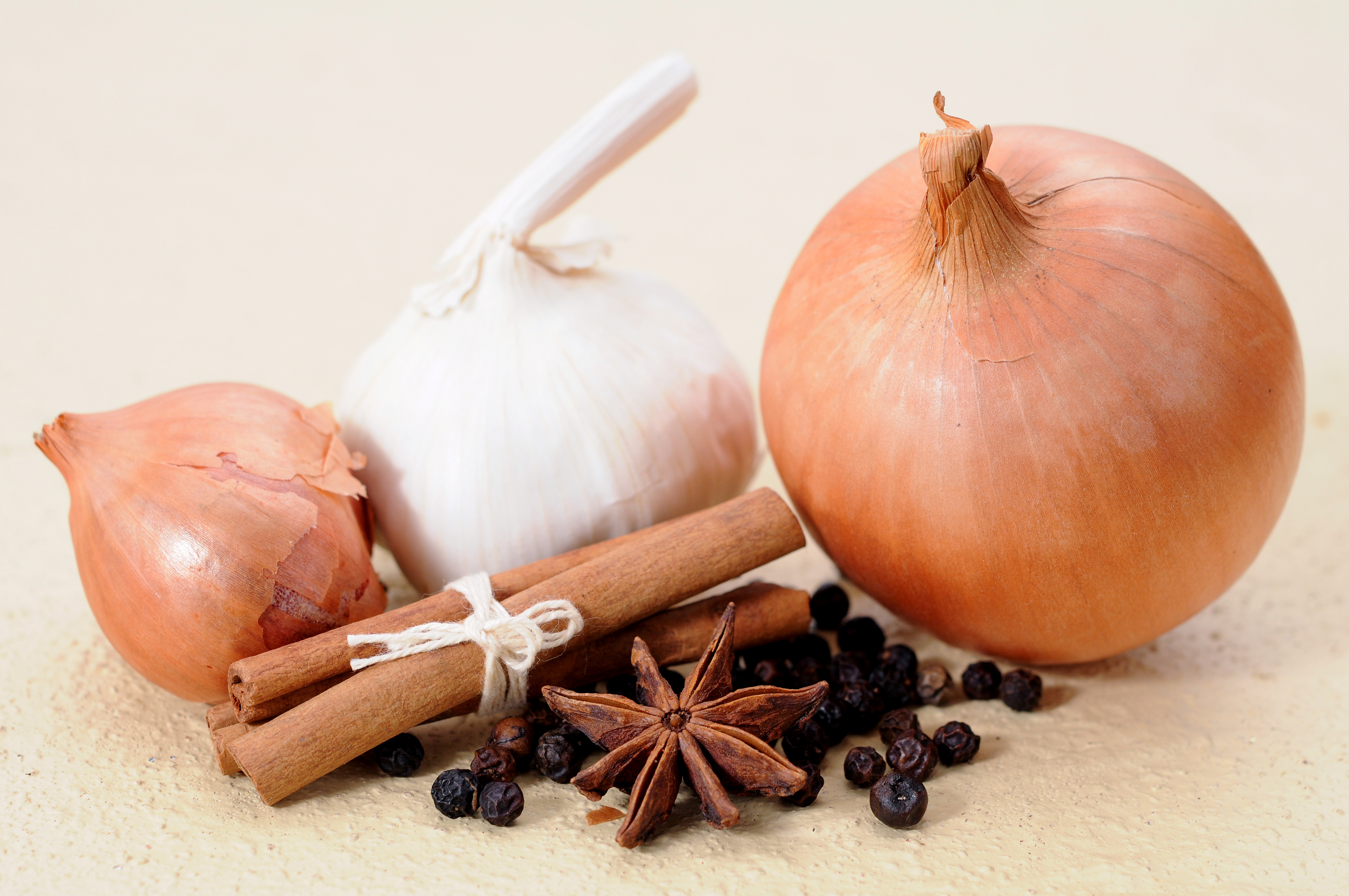 Most every fiery foods fan knows that it is the chemical called Capsaicin that gives chile peppers a “hot” or “spicy” sensation and that the amount of Capsaicin present in chile pods (and other things like hot sauce) is measured on the Scoville Scale.

A question I sometimes get asked is, “Scott, is there a way to measure the amount of “heat” or pungency in other “spicy” items like black pepper, ginger, horseradish, garlic, wasabi, mustard, garlic, cinnamon, and onions? Let’s look at these items one by one.

These three plants all produce an oil called Allyl Isothiocyanate (AITC). This chemical has a type of “spiciness” that foodies know is quite a bit different than the piquancy of capsaicin-filled chile peppers. Allyl Isothiocyanate lacks a lot of the pure “burning” or “fire” sensation of capsaicin and instead is more of an aromatic (meaning it triggers the nostrils more) and more of an irritant. If you’ve ever eaten strong horseradish, you’re quite familiar with its bluster, smell, and bite.

A side note: plain, yellow “ballpark” mustard that many Americans have grown accustomed to consuming on things like hot dogs and hamburgers contains scant amounts of little Allyl Isothiocyanate; and instead gets a lot of its flavor from ingredients such as vinegar, sugar, and turmeric. If you’ve never had extremely spicy mustard containing lots of pungent heat, and you go to first try some, you might mistake that spiciness for the presence of horseradish. What you’re tasting is probably higher amounts of mustard seed with that Allyl Isothiocyanate, and it probably has no horseradish in there!

One of the world’s most popular seasonings, black pepper, is often mistaken as either being chile peppers or closely related to them. This confusion started around the time of Christopher Columbus, when he came across chiles in the New World and erroneously brought them back to Europe calling them “peppers” (the misnomer stuck, so many of us call them “chile peppers”).

Chile peppers and peppercorns are completely different things. Chiles can be fruit pods of hundreds of cultivars and varieties from five domesticated plant species, which are capsicum annuum, capsicum baccatum, capsicum chinense, capsicum frutescens, and capsicum pubescens, and contain everything from sweet bell peppers and jalapenos to cayennes and bhut jolokias. Black pepper comes from the piper nigrum species, and the spice we call know and love is produced from the dried and ground peppercorns from that plant. Peppercorns contain none of the capsaicin found in chiles and instead possess a chemical called Piperine.

Piperine’s burn can closely resemble that of capsaicin, but tends to be milder by comparison. In fact, pure Piperine, if you were able to “rate” it on the Scoville Scale, would clock in somewhere around 100,000 Scoville Heat Units (compared to 16,000,000 SHU for pure capsaicin). The amount of Piperine varies from 1 to 2% in long pepper, and 5 to 10% in commercial white and black peppers. That means that those flakes of black pepper can be around 5,000 to 10,000 SHU, which is around or slightly “hotter” than an average jalapeno. Just imagine jalapeno flakes of roughly the same size and mass, and you can get a good picture of what black pepper can add in terms of spiciness (although the flavor of each one is vastly different!). But there currently is no specific scale to measure the amount of Piperine in any foods.

Ginger, or gingeroot, has a very distinctive sweet and pungent flavor and aroma. Ginger gets most of its taste and spiciness from oils that contain the chemicals Zingerone, Shogaol, and Gingerol. The last one, Gingerol, is the main factor in ginger’s strong bite and smell. Although there is no scale to measure the pungency of pure Gingerol, if you were able to measure it on the Scoville Scale, it would have a rough rating of 60,000 Scoville Heat Units.

Guess what? There is actually a defined scale with which chemists can measure the pungency of onions and garlic! It is called the Pyruvate Scale.

The Pyruvate Scale is named after pyruvic acid, the alpha-keto acid co-product created in the biochemical pathway that forms syn-Propanethial-S-oxide, the main lachrymatory agent in onions (and that is what makes us cry when we slice ’em!). Garlic and onions also have a pungent chemical agent called Allicin. Both garlic and onions can be tested using High-Performance Liquid Chromatography (HPLC for short), which is the same process scientists can use to measure Capsaicin in chile peppers.

The Pyruvate Scale has a simple numbering system that goes from 1 to 10, based on the number of micromoles per gram fresh weight (written out like µmol/gfw). Here is how certain onions would rate:

In my research, I could not find any real numbers on how garlic would rate on this scale. If you have access to this data, please send it my way!

Similar to chile peppers, factors like soil type, rain, and sunlight affect the pungency in onions and garlic and, therefore, their score on the Pyruvate Scale.

This spice is created from the inner tree park from over a dozen trees in the genus cinnaomomum. There’s an essential oil in the tree bark that contains an ominous-sounding chemical called Cinnamaldehyde; and to a lesser extent, the more aromatic chemical Eugenol. There is no equivalent heat scale used to measure these.

Just like cinnamon, these plants also contain Eugenol, so they give off a pungent and aromatic sensation.