Here is s re-publication of a popular blog post from 2009. Enjoy! 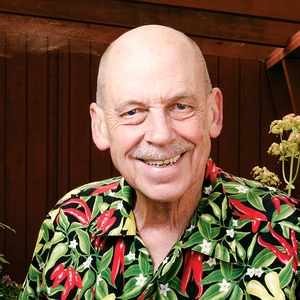 It seems as though when I go both online and in the “real world,” whenever I mention the fact that I’m into chile peppers and hot sauce, there’s a good chance that the people I meet will drudge up a misconception, myth, or urban legend about the subject. To help clear the constant confusion, I’ve for the longest time wanted to make a blog post that would take on the most common ideas and separate the fantasy from reality.

To accomplish this, I’ve asked Dave DeWitt to help out and verify if any of these chile pepper and hot sauce myths are true. Dave is more than qualified to answer, as he is one of the world’s foremost experts on chile peppers – he’s written more than 35 chile-related books, is a board member of the Chile Pepper Institute at New Mexico State University, producer of the Fiery Foods and BBQ Show, therefore rightly earning the nickname “The Pope of Peppers”. His brand new book, The Complete Chile Pepper Book, is now available on Amazon, and you can visit his Fiery Foods and BBQ SuperSite for a vast wealth of spicy information.

Scott: The capsaicin found in chile peppers and hot sauces can irritate parts of the body, such as the skin, eyes, mouth, and tongue. As some people have claimed, can you actually get a blister from capsaicin contact?

Dave: Yes, it’s called contact dermatitis. Like with poison ivy, some people are more sensitive and some are even immune.

Scott: I’m constantly scouring the internet for spicy food news, and at least once a month on a blog or news site, someone is rehashing an article touting the “health benefits of eating chile peppers”. Do chile peppers really have any of these supposed benefits?

Dave: Although most of the “health benefits” are exaggerated, chile peppers do have high levels of vitamin C when green and vitamin A when red. Since they have no cholesterol, very low fat and calories, and high fiber, they are good for you. Applied topically, they are anti-oxidants and have been shown to kill some types of bacteria.

Scott: Can eating too much spicy food (or capsaicin in general) produce harmful effects to your body or even kill you?

Dave: Spicy food will not harm you unless you overdose, but pure capsaicin is a deadly poison. C.L. Winek conducted a study that was published in Drug and Chemical Toxicology that examined the overdose potential of Tabasco® Sauce. He concluded that a person of average weight would have to consume nearly a half-gallon of the sauce to overdose and become unconscious. The acute fatal toxicity dose for a 150-pound person would be about thirteen grams of pure, crystalline capsaicinoids.

Dave: Chile peppers can irritate pre-existing ulcers but do not cause them or GERD (Gastroesophageal reflux disease).

Scott: Can beer or water work as well as milk at reducing the burning sensation caused by chiles and hot sauce?

Dave: No. Cold beverages give the illusion of cooling your mouth down for a few moments, then the burn returns.

Scott: What parts of a chile pepper contain the most heat? Is it the seeds or the white inner membrane near the stem? Do the seeds actually contain any heat?

Dave: The placental tissue, to which the seeds are attached, contains the most heat. Seeds are often coated with capsaicin during processing but have no heat themselves.

Scott: What about the waivers that some companies or restaurants make you sign before consuming their ultra-fiery hot sauce or hot wings – are they really necessary or are they more of a publicity stunt?

Dave: They are a publicity stunt. Anyone can sue anyone else for anything, despite waivers. However, a signed waiver could convince a jury that the injured person acted of his or her own volition.

Scott: Is there a such thing as a “Hatch chile”?

Dave: No. There is no cultivar or variety called “Hatch.” There are not enough chiles grown within a five-mile radius of that New Mexico town to account for all the chiles designated as “Hatch.” It is a classic legend or myth.

Scott: Can hot sauce really clean copper pennies? If so, is it actually the capsaicin doing the cleaning, or is it something else?

Dave: No, but hot sauce can because of the vinegar in it. Copper pennies are 97.5 % zinc, anyway.

[Scott note: I’ve unearthed a couple of good online resources documenting experiments where pennies are cleaned with a variety of taco sauces, hot sauces, and more. You can find them here and here.]

Scott: Can chiles warm you up, either by eating them or by rubbing them on your skin?

Dave: Capsaicin in chiles is a rubefacient, an agent that brings blood to the surface of the skin, giving a small degree of warmth because of increased circulation. Eating them does not warm you up.

Scott: Dave, are there any other myths or misconceptions about chiles or hot sauce you wish to dispel?

Dave: Capsaicin does not have anything to do with your taste buds, which perceive only salty, sweet, sour, bitter, and umami (MSG) flavors. Rather, there are capsaicin receptors in your mouth and tongue that are triggered by capsaicin and send pain signals to the brain. Capsaicin does not permanently destroy taste buds as, like hair, they are being constantly replaced by the body.

Previous
What is Nashville Hot Chicken?
Next
And Away We Go!