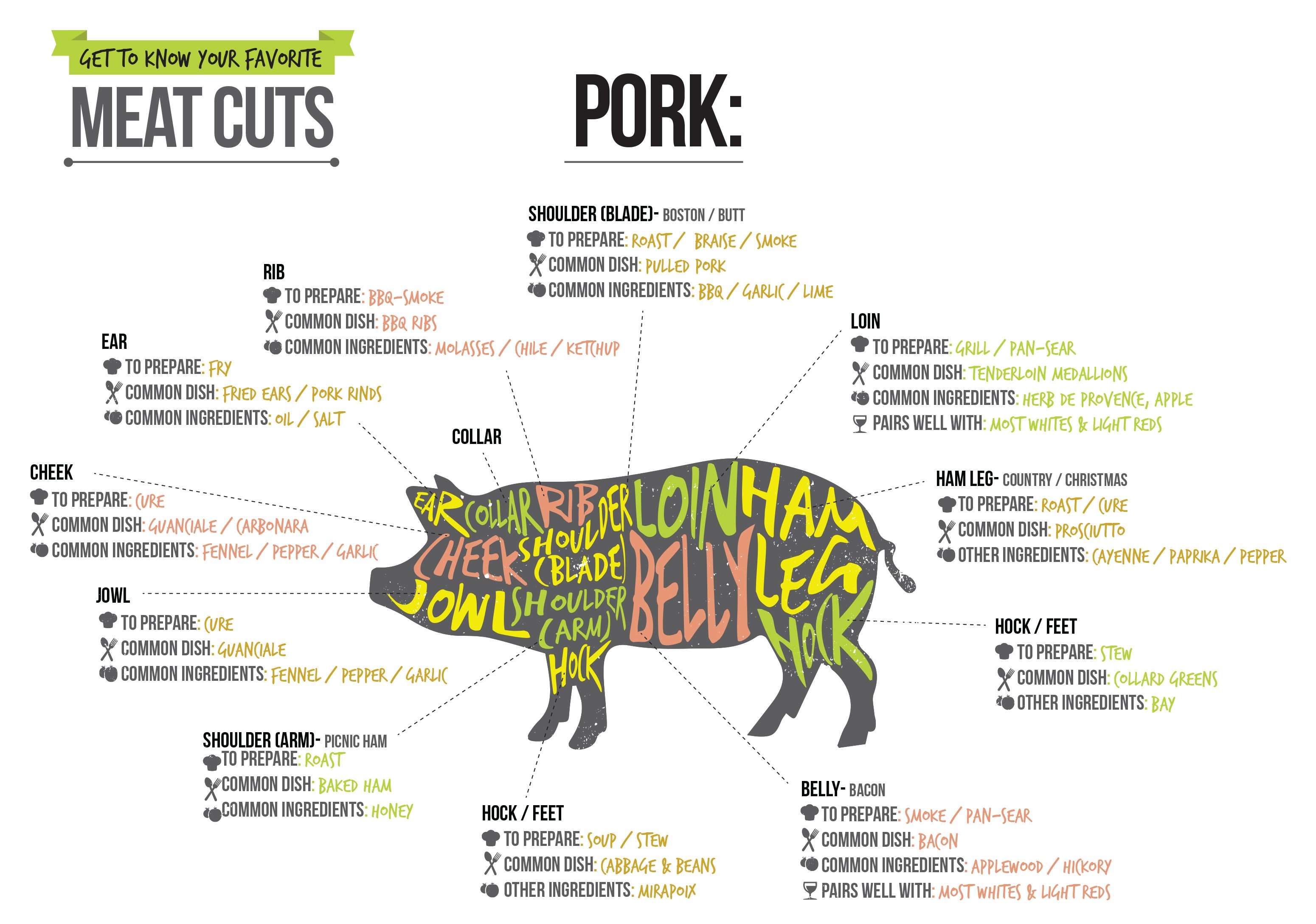 Are you a True BBQ Pitmaster? Do You Know Your Cuts of Pork?

There is nothing on God’s green earth that quite compares to a perfectly cooked beef steak or grilled or smoked chicken.  But my favorite grilled or barbecued animal of choice? It is perhaps the pig.

Pork is undeniably one of the most commonly consumed meats in the world. My preference for swine is due to the meat being sweet and juicy, almost to the point of being deliciously unctuous. I also love pig because there is simply so much you can do with it and the types of meat they offer. I mean, you can get ribs, pulled pork, ham, St. Louis-style pork steaks, sausage, bacon…(sigh) What’s not to love?

Where do you start? There are seemingly endless cuts that can be found, some better known than others, even if you only include what’s found at your neighborhood grocery store. Basically, the leaner and more tender cuts are located at the top of a pig, whereas the lower parts are tougher, fattier, and often require longer cooking times at lower temps to make them juicy and tender.

The cuts below are generally what you find around the United States. Internationally, your mileage may vary when it comes to precise cuts and names.

Let’s start at the top and front of the pig.

Pork Shoulder, Or Pork Butt
Pork shoulder (also referred to as a pork butt or “Boston butt”) is generally sold in grocery stores and butcher shops as a large chunk of meat typically between 5 and 10 pounds in weight. Sometimes pork shoulder chops are sold with bones, but those are a little less common.

Shoulders can be oven-roasted or braised, but by far my favorite way of preparation is barbecuing them slowly over low heat. I like using apple, hickory, peach, or pecan wood for the smoke. Cook them in your BBQ smoker for approximately one hour per pound, until the internal temperature of the shoulder reaches at least 195F. Once done, shred up the shoulder (“pulled pork”) and serve on sandwiches, soft flour tortillas, or on nachos.

Picnic Ham
Immediately below the shoulder is the next cut you’re likely to find: the Picnic Ham (once in a while dubbed the picnic shoulder). These can be smoked or braised. The picnic ham’s enormous fat cap is terrific for making cracklings.

Country Style Spare Ribs
These are NOT what you think of when people refer to regular “pork ribs,” “spare ribs,” or “baby back ribs.” These come directly off the picnic ham.

Pork Steaks
If you’re from the St. Louis metro area, then you surely know about the delicacy that is a wonderful grilled pork steak. Pork steaks come from the Boston butt or pork blade steak areas of a hog, so in other words, they are cut from the shoulder of the pig around 1/2 to 3/4 of an inch thick.

Front Hock
Usually sold as a “ham hock” in the store, and come typically already brined and smoked.

Pork Loin
Going back a little, we find the loin. Very lean and tender, the pork tenderloin is an excellent cut of meat and comes from the pig’s back.

Pork Chops
Thick or thin, bone-in or boneless pork chops are cut from meat perpendicular to the spine, often from the loin. Cook ’em hot and fast on the grill, or Shake n’ Bake and oven bake them for a trip back to your mom’s cooking of yesteryear.

Pork Belly / Bacon
The belly is pretty self-explanatory. It can be grilled, smoked, or baked. Bacon is pork belly that is cured, smoked, and sliced.

Baby Back Ribs
When you de-bone a pork loin, the ribs that come off of that are the baby back ribs. They are a more tender rib option: The meat in between the ribs is loin meat instead of belly meat.

Spare Ribs
Spare ribs come off of the belly. Spare ribs are available as both regular style or St. Louis style spare ribs, the latter of which have had the sternum bone, cartilage, and rib tips removed. The St. Louis cut shape is almost rectangular.

Although baby backs and spares are similar in a lot of ways, the spares are the ones usually cooked up in BBQ competitions.

Sirloin
Yes, even hogs have sirloins. This weird, irregular-shaped section of pork is often cut into chops, and is meatier, and has more flavor.

Rear Leg
Most people eat the rear leg as ham – cured, smoked, and processed in some kind of way.

Hock
The rear hock is just like the shank of the front leg. It usually comes cured and smoked.

There’s more! Now for some of the more obscure pieces of pork…

Half or Whole Pig Head
Believe it or not, many cultures and cuisines utilize hog’s heads. One such usage is Porchetta di Testa salami made from both the meat and skin of a pig head.

Tail
It can be grilled or oven-baked. Although having a bit more cartilage and less meat, tails can be similar to eating pork ribs.

Trotters
These are the pig’s feet…you know, things they “trot” with? Not good for much except for adding flavor to stock, as trotters are virtually all cartilage.