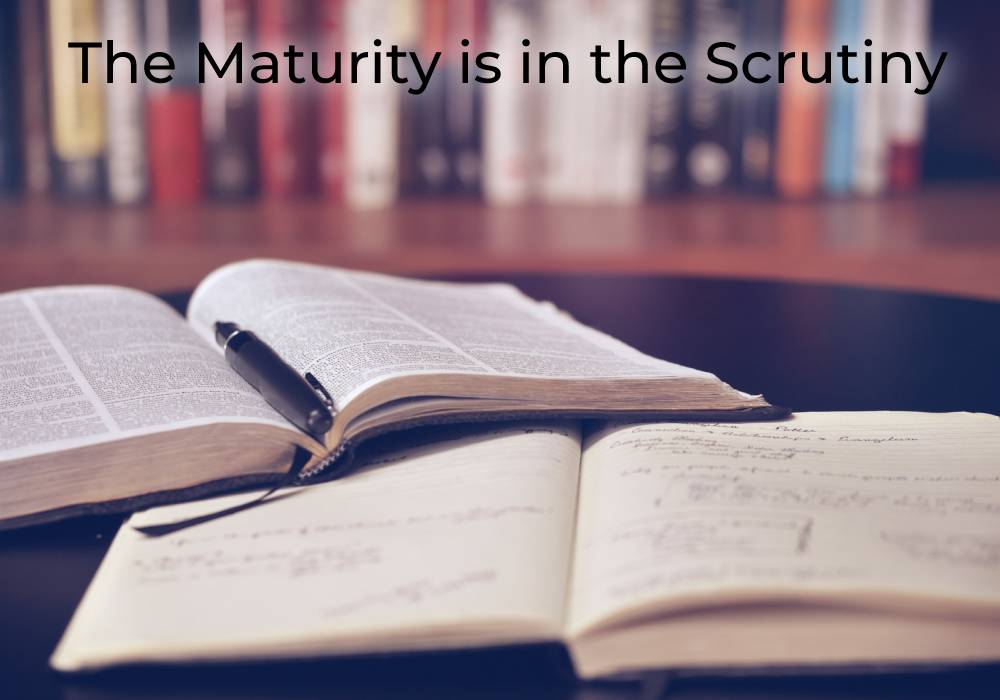 Christ gives us sufficient warning in the Scriptures of the coming age of deception. He says in Matthew 24:4-5, “Take heed that no man deceive you. For many shall come in my name, saying I am Christ; and shall deceive many.” This post won’t be an effort to prove that we are in a time of deception; that subject can be treated at a later time. However, suffice it to say that we live in a time of confusion and misleading that has the potential to harm the Body of Christ. How do we deal with this deception? Better yet, how do we arm ourselves against the barrage of false truth in today’s society?

The writer of Hebrews, who was dealing with immature believers who allowed themselves to remain in a babe-like state, exhorts them to grow in the things of God. In their current condition, they require milk because they are inexperienced in handling the message of righteousness though enough time had elapsed where they could’ve been teachers. Nevertheless, he points out a few attributes that characterize their lack of adulthood and determines that those who can only handle milk are unprepared in their ability to discern between good and evil, or truth and deception. Hebrews 5:14 says, “But solid food is for the mature – for those whose senses have been trained to distinguish between good and evil.” To illustrate, a baby is typically susceptible to danger because it has not developed the awareness of danger that an older man has. Even small children can are usually seen frolicking around, oblivious to any threats to their safety. It is often the “grown-up,” the mature and watchful adult that is conscious of lurking hazards and examining the surroundings for any probable harm. What is the difference between the two? The difference is that the adult has had enough experience with possible and actual danger that they can recognize what is imperceptible to the child. Their ability to survey and evaluate possible endangerment is what the immature child lacks, and this applies to Christians who lack the skill to determine deception or truth.

Therefore, maturity is seen or observed in the scrutiny. That is, the ability to scrutinize and examine in an effort to discover truth or discern between good and evil is the mark of growth in the Christian. As babes in Christ, our immediate encounters with truth occur by being told or guided as to what truth is. Often we’re not unlike the Ethiopian eunuch who could not perceive what he read without some man guiding him or showing him the way. As new saints, we have to be shown how to follow Christ and observe His commandments in order to lead a life unto His pleasing. However, there also should come a time in our growing in grace that we become mature enough to know or discover how to orient our lives in a way that pleases God. As we grow as Christians, the training wheels are removed, the walking aids are discarded, and the attractions of strangers don’t sway us. This kind of maturing and ability to distinguish right and wrong comes from acquaintance and familiarity with Christ. Because I’ve spent time with Christ, I’m familiar with His voice and His leadings. Even in the midst of a thousand would-be Christs, I’m aware of the true Christ because of my close association with Him. Therein is the formula for safeguarding against deception and being led astray: training in recognizing truth that develops into a close acquaintance with Christ leads to the ability to scrutinize anything that may claim to be Christ. This is the mature Christian; this is the Christian that knows how to be still and know God. This is the Christian who will ask questions to discover the intent behind the content; that will lend itself to studying to sharpen his reasoning and skill in determining truth. This is the Christian that we should aspire to be if we do as Christ commands, “Take my yoke upon you and learn of me.”

Dear Christian, resolve in your mind not to be led astray by every wind and doctrine by drawing closer to the Lord Jesus Christ so that you may know His voice in the confusion and cacophony of voices that would pretend to be His. Get involved in a Christian community where you can be trained and strengthened in learning who Christ is so that a wolf in sheep’s clothing doesn’t fool you. And finally, I end with the appeal of the Apostle Paul in 2 Timothy 2:15, “Study to show thyself approved unto God, a workman that needeth not to be ashamed, rightly dividing the word of truth.” [KJV]