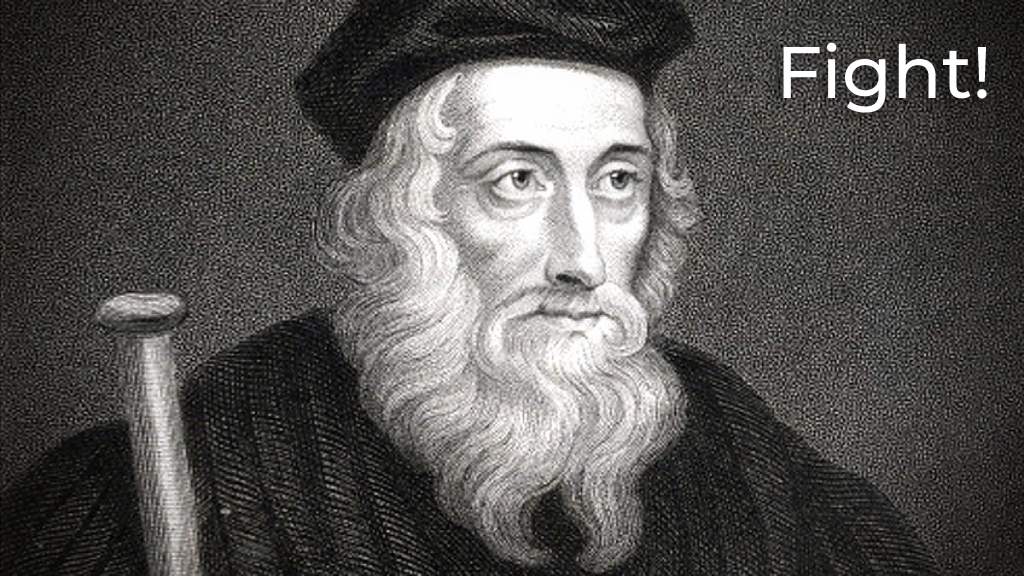 I often wonder about our forefathers in the faith and imagine how they would characterize this generation of Christianity and how we have handled the foundation they laid and the fruit they labored to obtain. History is filled with the testimonies of remarkable heroes of the faith who withstood insurmountable odds and overcame extreme difficulties, often at the expense of their lives or reputation. If they could view the present, what would they say to this pop cultural Christianity that touts a life of glamourous faith without struggle, whereby we can “name it, and claim it,” and God, without any sovereign will of His own, has to perform and obey His children?

Our generation has gone above and beyond by adopting the principles of the New Age by instructing Christians to manifest their desires. What could stop this new batch of Christians? If the poor, ignorant disciples had this “revelation,” perhaps they wouldn’t have had as much opposition as they encountered. One thing’s for sure; they wouldn’t have been able to endure the oppression of their enemies, waiting for God to swoop down and obey their command for speedy deliverance. Maybe accompanied by this new teaching, conquering kingdoms with the Gospel of Christ and infiltrating foreign nations as ambassadors would’ve been uncomplicated, but would it have been able to sustain these “easy-going Christians” for subsequent generations? Of these types of believers, Tertullian could never say, “The blood of the martyrs is the seed of the church.” Where would Christendom be without struggle, obstacles, and sacrifice? It is precisely this that has made Christianity sustainable because it cultivates firm believers of conviction because of contention and not the absence of it.

I feel sorry for Modern Christians who don’t know their history and are unaware of the brave men and women who, through grievous loss, obtained a greater witness on earth by their service. These men and women forged Christianity across continents, and vast landscapes, through treacherous regimes and dogmatic superficiality.  Although time has forgotten many of these Spirit-filled warriors of the faith, the ground wherein they labored bears the fruit from seeds sown in anguish and watered by tears as proof of their existence. These people fought! They strove with despotic monarchs and demonized militia. They fought against untamable tides at sea, unrelenting diseases, and unforgiving seasons of death. Oh, dear Christian, they fought; through misunderstandings, evil plotting, lies, deceit, political manipulation, and wrongful imprisonment. They were mocked by crowds, lambasted in articles, and dehumanized by caricatured cartoons. Despite all the cruel mishandling that men have performed, Christianity lives on because they fought.

This is a fighting way, dear Christian. Do not be taken aside by the pomp and circumstance of this New Age Christianity that is as useful as a dog without teeth. Don’t allow the reverie of ease and fickle promises of “peace” cause you to believe Christianity is a passive existence. No, we fight. We fight as Amy Carmichael, who withstood the crippling disease ravaging her body, to administer the “Balm in Gilead” to temple prostitutes in India. We fight as John Wycliffe fought, who, in infamy and at the risk of his life, sought to translate the Scriptures into the common tongue so that the populace could know for themselves the riches in Christ. We fight as Hudson Taylor fought, who brought the truth of Christ to China and established the Inland China Mission, having to endure the loss of his wife and partner in ministry. We fight as Father Damien fought on the island of Molokai, who courageously preached and served the leperous colonies there and continued to preach Christ after he contracted the fatal disease. We fight as they fought because this faith is worth the striving!

We fight because this is what was modeled by our Captain of Salvation. How soon we forget Christ didn’t have it any easier. He wasn’t received as the Prince of Peace, carried by porters from village to village, but instead, He was despised and rejected and deemed a blasphemer of the Almighty. Remember, John 1:11 says, “He came into his own, and his own received him not.” With valor, He preached to false accusers and, with bravery, went into Jerusalem, knowing He would be delivered into the hands of cruel men.

The example of His fighting produced fighting men; therefore, the disciples could declare in the face of apparent death that they’d rather obey God than man. Thus, out of gratitude for His agony and passion on the cross, we fight the fight of faith. After making so many grand declarations about the goodness of God and Christ, our Saviour, we must pick up our swords and don our armor and war to maintain this living hope that beats within our breasts. We must endeavor to prevail against the alluring philosophies of our times and deceptions from the wicked and continue advancing the Kingdom of God. We need to awaken from this stupor of convenience and “quit ourselves like men and gird up our loins.” Because of our call to eternal life, we mustn’t let it slip through our fingers either for ourselves or future generations.