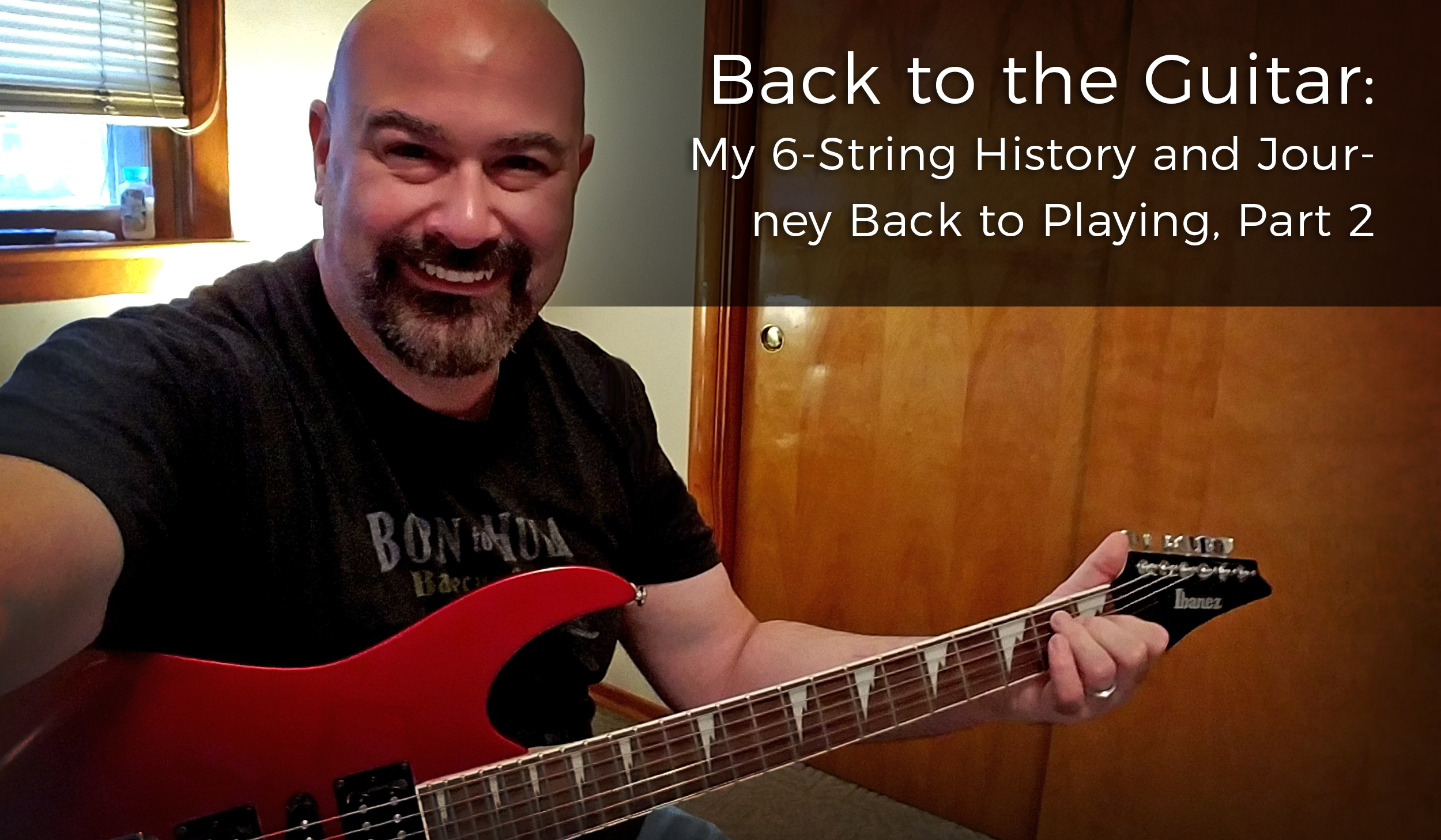 For those of you following along in this tale, here’s where we last let off:

Married with two young children, I sold off all of my beloved guitar gear to stay afloat financially. The Van Halen-themed and guitar-oriented websites were decimated off of the interwebs. And my dream of ever making it professionally as a musician had sailed away almost a decade earlier.

The practice of me performing music was personally dead, yet somewhere deep down in the recesses of my soul I knew that at some point in my life, I would reacquire a guitar and an amp and wail wildly once again. When that would be, I had no idea – months? Years? Decades, even? The flame of a 6-string resurrection was faintly burning and occasionally fueled by adding guitar instrumental tracks to my iTunes playlists. I loved to go out on morning walks using a soundtrack peppered with the likes of Shawn Lane, Phil Keaggy, Allan Holdsworth, and Paul Gilbert, just to name a few, with me air-guitaring along with their fretboard mastery!

In 2010, my wife and I were headed for divorce, with the final filing taking place late in the year. I won’t needlessly weigh this post down with too many personal details about it. Let’s just say that at that juncture in my disheveled life, I needed guidance, direction, and a re-discovery of who I was.

Around this time along my journey, I made a few bone-headed decisions. Yeah…they were pretty stinking bad. But one massive impetus of victory was my choice to steer my sights back on having Jesus Christ regularly in my life. This and other aspects of my life were talked about in my A New Undertaking in Writing…and a New Beginning post from many months back.

And…a few months into the divorce process, I decided on perusing Craigslist to find a cheap guitar to pluck around on. I settled on a nice, used Yamaha acoustic for a hundred smackers.

Purchasing this instrument was the only time I’ve come close to having a “mid-life crisis,” and thankfully I was able to abstain from typical middle-aged desperations such as shelling out tens of thousands to buy a new sports car or get a horrible hair weave.

Periodically tinkering around on my Yamaha was a good way to blow off some steam. Yet the frequency in which I picked up my guitar got lesser and lesser over the next couple of years, despite me still having a minuscule desire to once again jam with an electric through a wall of Marshalls (okay, maybe not an entire wall of them; more like a single 4 x 12 cabinet would do the trick!). I figured that after I eventually got remarried and we settled in together as a new family, I would work on building up my musical gear supply again.

Fast-forward to this year. I can say that 2017 has been one of the most eventful – and best – periods of time in my life. A no-compromising dedication to Christ, a new wife, and a new car were just some of the things that make this year stand out. Life has been pretty sweet, glory to God!

One day sunny afternoon I departed my office place to pick up my oldest son. At an intersection stoplight with a green arrow, I was steering into a left turn that I had performed a couple of hundred times before. Unbeknownst to me, a car was zipping at full speed from the other way with no signs of slowing, and I did not notice it until it was too late.  The approaching automobile had proceeded to wallop the front passenger side of my vehicle.

I had not “blacked out” or anything, but the next few seconds were a total blur to me. In that time, my own car had done a complete 180-degree turn from where it was located when I started to steer. As soon as I was able to fully comprehend again and get my bearings, I had noticed that all of the airbags had deployed, the windshield was a waste, and that there were light smoke and a heavy, putrid burning smell filling up the cabin. I felt “heat” emanating from some unknown source; I had later assumed it was a symptom of my being in a defensive state of shock and the rush of adrenaline rushing through my body.

Then, scanning around, my eyes caught sight of my left forearm: it was literally hanging there, flopping. Yes, my forearm was unnaturally bent down, almost rubber-like, just…hanging. If you’ve ever seen the film version of Harry Potter and the Chamber of Secrets and saw the boneless Harry laying on the Quidditch field, it was nauseatingly similar.

That’s not all. I noticed that a thick dripping of blood was coming from the back of my arm, thereby staining the left leg of my blue jeans a bloody crimson color, caused by one of the broken bones protruding from my skin. Yikes.

A witness aided me in finding my phone so that I could call my son and inform him of the incident. Another Good Samaritan helped me with my broken arm out of the car and onto the adjacent sidewalk, while a U-shaped travel neck pillow I had in the car served a dual-purpose by propping up my arm as I sat down Indian-style, and also as a makeshift sponge for the blood trickling out.

Thankfully, those were the extent of my injuries. And praise God that He would give us an initial response to danger by temporarily “turning off” pain and fueling the body with extra adrenaline so that I could talk to the paramedics that had arrived on the scene. After they loaded me into the back of her ambulance, pain in my arm went screaming to a 10-out-of-10 level halfway to the hospital.

What the x-rays uncovered were compound fractures in both the radius and the ulna, with a butterfly break in the ulna. Surgery was done the next day to put in flat, stainless steel plates to hold both bones while they fused together over the next several months.

While the bones were gradually healing up, I had a monstrous barrier ahead of me: regaining the use of my left arm and hand.

My left-hand fingers were permanently “locked” together in a curled-up, “claw hand” position. My fingers would not move at all, either by my own strength or with assistance from my right hand. I mean, they were stiff and solid! Additionally, whenever my wife barely touched my fingertips, there was burning pain that shot through them.

My wrist and arm also had a long way to go to get back to normal. Most notably was the twisting motion of my forearms – both pronation (rotating your hands palm-down) and supination (moving your forearm palm-up) were severely limited.

I’ve Got to Do Something!

The Back to the Future movies are one of my favorite film trilogies of all time, so I relish any instance where I can reference these time travel classics. In Back to the Future 2, we find out that the future version of main protagonist Marty McFly (Michael J. Fox) is still lamenting about a hand injury he received 30 years prior as a teenager when he accepted a dare to race by his rival/future co-worker Douglas J. Needles (played by Flea of the Red Hot Chili Peppers) and collided his beloved Toyota pickup truck into a Rolls Royce.

Because of the wibbly-wobbly, timey-wimey nature of time travel in these crazy tales, we actually get to see the start of the race in Back to the Future 3. Thankfully the 17-year-old Marty, armed with his newfound knowledge of the future, had put his truck into reverse and literally backed out of the race, prevented the wreck with the Rolls Royce from even happening, and saved his hand from getting smashed.

Although I do not possess a time machine, nor am I going to accept any challenges to race anyone any time soon (I don’t care how many times they call me “chicken!”), I still don’t want to suffer the same fate as Marty. I’m going to do something about this and get my hand back into “fighting shape” again!

Since I have to do all I can for my left hand, I figured that incorporating some guitar therapy into my regular physical therapy would be a wise choice for gaining finger strength and coordination. This idea was given the “okay” by both the operating orthopedic surgeon and my physical therapist.  When I got back home, I grabbed my acoustic and attempted to finger a chord.

Ouch! The low range of motion in my forearm prevented me from twisting my wrist around enough to accomplish this feat. After a couple of weeks of therapy and doing supination exercises in addition to building up isolated finger strength, I was finally able to rotate my arm and fret an E chord: 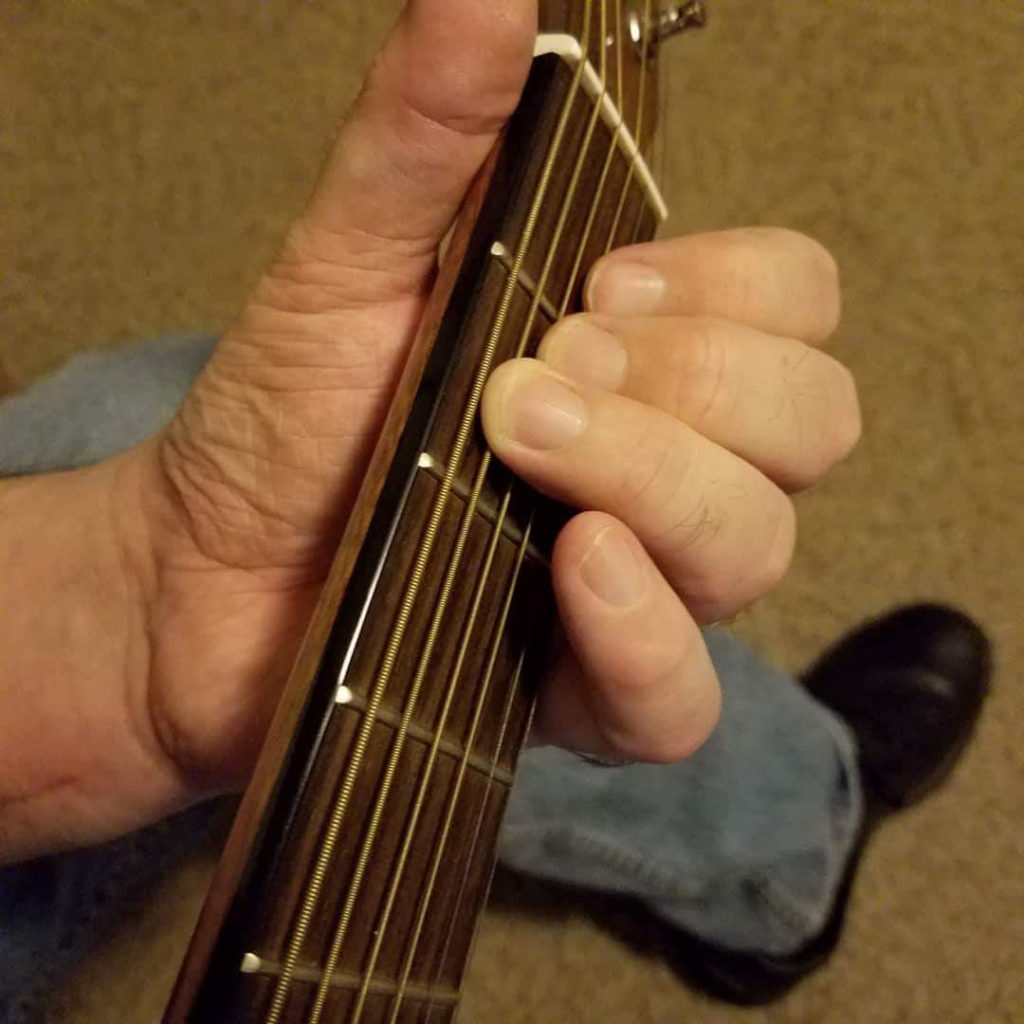 Yeah, this might have been a little underwhelming for some folks, but it was a huge hurdle for me to bound over! Although I knew I had a long way to go, this first triumphant step was enough to put a building wind in my sails.

Practice Routine – Getting Back Into Guitar After Injury

Below is a daily practice regimen I’ve developed on my own to get me back from absolute ground zero (bouncing back from having absolutely no motor controls at all in my left hand) to playing competently on guitar. Again, I have to stress that I was given a green light from both the medical doctor/surgeon and from my physical therapist to pursue practicing guitar. If you find yourself in a similar predicament with a broken arm/wrist/hand and are trying to regain full control of your hand again, please consult a medical professional before jumping into an activity such as this.

The aim of this routine is this:

This isn’t necessarily what I would recommend for a beginner guitarist to use, because part of the reason I’m doing this is to regain full strength and control of my fingers again for overall usage in life, in addition to the extra added benefit of teaching myself how to play guitar again. At this moment, it is also how much “muscle memory” I’m able to retain from years past, or if bouncing back from a hand injury is truly a case of starting over from scratch.

I will give everyone an update on my fretboard adventures in Part 3! 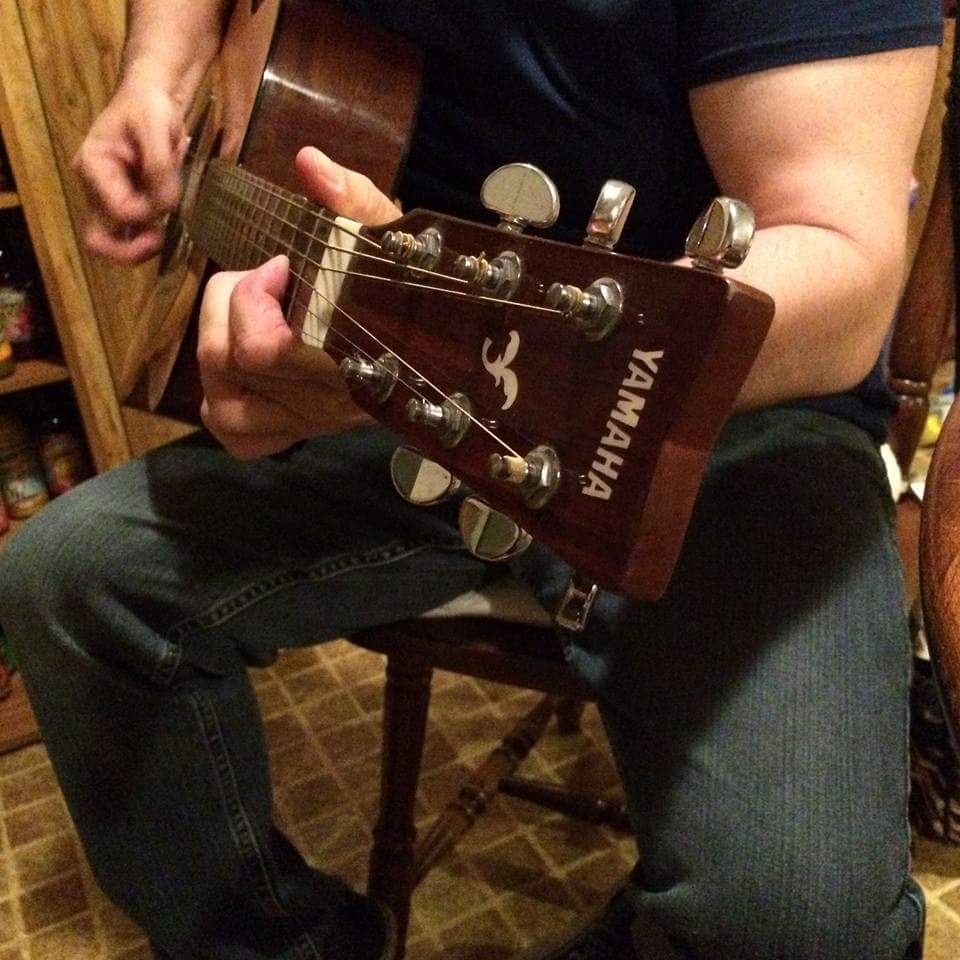 Previous
Back to the Guitar: My 6-String History and…
Next
Don't Let H.A.L.T. Make You Weak